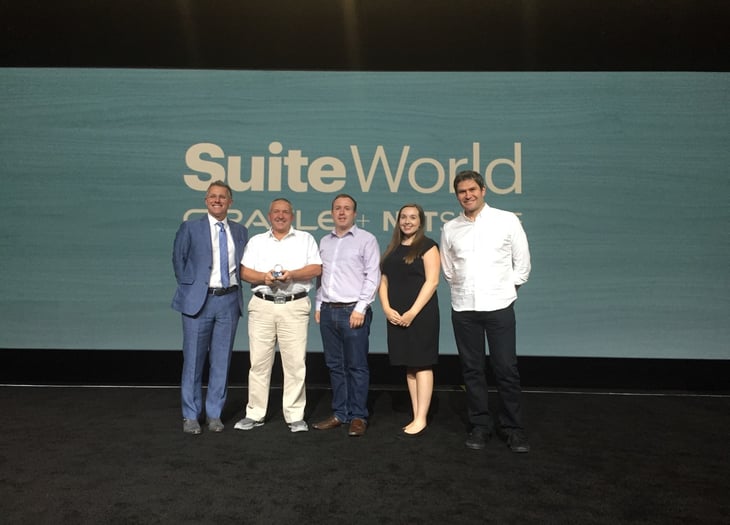 29 May 2018 – FHL Cloud Solutions (FHL) was named NetSuite 2018 ‘Solution Provider Partner of the Year for EMEA’ for a seventh time at NetSuite’s SuiteWorld18 event in Las Vegas. FHL was also honoured with a NetSuite 5-Star Award.

Oracle NetSuite, one of the world’s leading providers of cloud-based financials / ERP, HR, Professional Services Automation (PSA) and Omnichannel commerce software suites, named FHL its leading partner for EMEA. No other provider has won the accolade as many times as FHL.

The award recognises FHL’s continued success in securing new clients, expanding its market share and delivering high-value subscriptions through its exemplary consulting and implementation services. The award is especially impressive as FHL has been through a period of significant change, which included becoming part of RSM UK in November 2017.

‘The team at FHL is one of the most accomplished in the industry and winning NetSuite’s Solution Provider Partner of the Year for EMEA again builds on that success,’ said Andrew Peddie, managing director, FHL Cloud Solutions.

‘Our year-on-year success is due to an extremely skilled team that understands the many challenges faced by businesses when sourcing a new business system. By working hand-in-hand with our clients to implement a NetSuite solution that’s perfectly suited to their needs, we ensure project targets are hit time and time again,’ continued Peddie.

FHL was also awarded NetSuite’s highest 5-star partner status at SuiteWorld18 for the fourth time, cementing the company’s leading position in Europe. Awarded to only a small number of partners worldwide, this accolade is given to NetSuite solution provider partners for sales revenue achievements.

Peddie adds, ‘It’s a fantastic accomplishment to be named amongst the top tier of NetSuite partners worldwide. As an elite cloud provider, we have no intention of standing still and look forward to continued growth and success.’

GET AWESOME UPDATES IN YOUR INBOX EVERY WEEK!*

Keep up to date on all our latest news! Just add your email. It’s that simple.